Today I quit my job at Discovery. It´s a great place to work and I have enjoyed it a lot. It started as a maternity cover (which in Denmark is roughly a year) and has stretched for a bit longer. I could have kept this job — but honestly, I really could not.

This is not to deny Discovery any praise. I love that brand. First time I heard of Discovery was in 1989. I overheard a young Danish girl, bragging in the posh part of town on the subway, about their family getting this outlandish tv-treat by satellite. I never heard of this channel before, but man, did I learn to love that channel. It was in many ways the way tv was supposed to be. And still is. Discovery puts content before anything else. All the time.

But during the last year and a half, something has rumbled in the back of my brain. I´ve had this feeling before. Last time was in 2005, when I worked at Danish broadcaster TV 2 as head of on air promotion. Exactly the same job, I have now, 15 years later, at Discovery in Denmark. I left linear television once, but it seemed I needed to do it again.

Back in 2005 the rumble in the back of my head came together to me leaving television to work with first digital and later social and digital as a consultant. Doing a lot of advertising and promotional work for a wide range of clients, both in broadcast media and in a lot of other industries. Ending with being the head of digital at the startup of a Danish talk radio, where we build everything digital in just 3 months. From the intranet over homepages, apps and best practice on social media platforms to the distribution of live- and time shifted programming.

I stayed on for a couple of years, adjusting and managing the digital operation — but ended up feeling more and more restless. I tried to go back to consulting, but found the times being a bit rusty. Some of my old clients had found other suppliers during my two year stint. And I had this distinct feeling of me not really being able to sell them something that was a better insight in to the future of advertising, than so many other sources. I only knew that the first waves of digital and social was worn completely out — it needed to be reinvented. But I could not tell how.

So I ended up with my old job for a new company. I was back to being the head of on air promotion for a broadcast company. And I enjoyed it. It was what I used to do — and did very well. Managing creatives and campaigns with a strict eye on building lasting structures, implementing best practice. It was probably the same feeling that you would have if you moved back in with your parents. It´s nice — but it´s not your house. So something kept rumbling in the back of my brain. I was trying to hatch the insight that was forming in my unconscious for two years.

Suddenly I cracked it. I had been doing commercial and promotional work since I was 16, where I started at a small local radiostation, and ever since. My life was being spent on trying to get people to hear, watch, read, see or buy stuff, using advertising and promotion. This in a time, where people are trying to and can avoid it more actively than ever before. Why use this outdated form of contact, when attention and contact is best gathered through real stories and communities best created through true values? I remember the moment where I had the real epiphany, thinking: Hey, nobody uses storyblockers. We need to stop doing advertising and start to bring something to the table that people actually want.

At last the insight was hatched. I am 43. I need to work with content. And I need to do it now. Otherwise I will never get to do it, cause time flies and so does insights and opportunities. But how? The annoying state of confusion following an insight is so much worse than the rumble leading to the insight.

Now I knew what I had to do — but I did not know how. I have had several companies and been involved in a couple of startups. None truly successful, some good enough to pay my way for many years, but not earn anything more than my monthly paycheck, leaving me as a kind of employee at my own company.

Luckily, a month ago, I saw this:

That eradicated any doubt in my mind. It is not a lottery. It´s an experience game and I need to do it again. This time using everything I have learned so far. The bits and pieces. The big things and all the small successes. Boil it up and make a new stronger soup. And I did just that. Went to work every day, and went home to work every night. Here I sketched a whole new way to work with creating contact, based on the sum of my professional experience.

That was why I quit my job at Discovery today. To create original digital content — for myself and others that need it. Not content marketing, but original digital content, that is made to bond emotionally with people and make them share. It´s not new to tell stories. In any sense. People have been doing it since we started drawing on the walls of caves. The new is that we need to stop yelling and start telling. And I want to be part of defining that big transformation.

But the risk? Vaynerchuck eradicated my fear in 6 minutes. Me being 43 is the best part of this, since I have so much more experience and so many more insights, than all the other times I have tried. This time I am wiser, so the risk should be lower. And I will use every drop of that hard earned wisdom to realize my new insight: in a world where nobody uses storyblockers, you should tell stories and produce it as original digital content — because that is what people are craving.

*This was written some time ago. I might be wiser now. The same goes for the rest of the world. 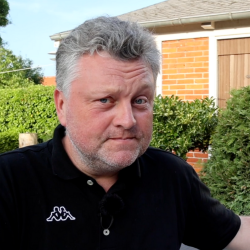